Home » My Story » Musings » All the things that might have been

What happens to the road not taken?  Does it wait for us to return, or does it blink out of existence?  And if we do return, is it truly the same road, since we ourselves have changed?

What about us:  do we divide into two at every fork, with one alternate version of ourselves taking one way and another the other?  And if that is so, might we reconnect further down the path of life, or crisscross, or switch back onto the road we left untraveled?

What of the people we meet along the way?  Are we destined to meet them no matter which road we follow, or do future friends and cohorts come into existence and disappear with every choice we make?  Will we find our soul mates whichever path we choose, or do different choices make us different people with different souls and different soul mates?

If you’re expecting me to answer these questions, you might as well stop reading here.  I have no more idea than you do, and maybe less.  But I do have a story about crossing paths and hidden possibilities.

It was the autumn of ‘84, and my backpack and I were drifting through Western Europe on ten-dollars-a-day, trying to visit all the classic tourist spots without being touristy, trying to find the real people and the real land without missing the famous monuments and milestones.

Sometimes it worked.  On a train from Luxembourg City to Cologne I met Dieter, a journalist who ended up inviting me to his home for roast venison, Cognac, and Cuban cigars.  In front of a London bar I met a retired professor who waxed philosophic about the ways of the modern world.  And one morning on the Orkney Islands, I ducked out of the North Atlantic drizzle to find myself in a pub packed with raucous octogenarians who had just picked up their old-age-pension checks at the post office and come next door for “coffee morning.”

A different train, a different morning, a different bar, and I would have no story to tell.  Who knows how many near misses there were, how many strangers on a train one seat away might have become fellow wanderers or intimates or partners-in-crime had either of us chosen a different seat, or had our eyes met at an opportune moment?

Again, I have no answers.  But I did glimpse a few might-have-beens, all because of a chance encounter with a storefront window. 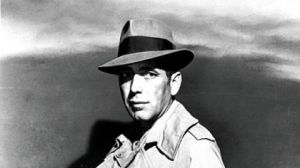 It was a hat shop in Vienna.  Now you’ll have to trust me that I almost never respond emotionally to department store merchandise of any kind — least of all, clothing.  But here I found myself almost irresistibly drawn to a cream colored fedora dangling seductively on the other side of the glass.  In that hat I could channel the cool detachment of Sam Spade, the dashing adventurism of Indiana Jones, and the suave sophistication of Cary Grant, all at the same time.

The price tag was dangling as well.  20 shillings, equal to 20 US dollars.  Enough to live on for two days.  My heart throbbed over the hat, but my budget silenced my love pangs and prodded me away.

I had other business in any case.  While I was experiencing the earthier side of Europe on a shoestring, my parents were crossing the continent in luxury on the Orient Express.

We had made no plans to meet.  But I knew their schedule and, when I found myself next door in Germany, it was easy enough to hop on over with my rail pass and meet them as their train pulled into the station.

It was a good move.  Parents always love to know their children are thinking of them, and mine couldn’t have been happier with the three hours we spent together before they raced off to their next destination.  So happy, in fact, that my father stuffed something in my hand as we said goodbye.

It was a bill.  A twenty.  Guess where I headed next.

The hat was still in the window, crying out for a new home.  I found one in my size, handed over the twenty, and turned out onto the sidewalk a new man.

I’d like to tell you that heads turned from every direction and young ladies swooned as I walked past.  Of course, if it were that easy, hats never would have gone out of style.

However, something else happened, something less dramatic but far more profound.

Within a couple of weeks I started hearing the same refrain almost everywhere I went:  I saw you in Spain, said an Australian in Florence. I saw you in Rome, said a Brit in Athens. I saw you on the ferry from Brindisi, said a fellow American in Plakias. My hat, it seemed, had become one of the popular sights of Europe.

Which got me thinking.  If not for my hat, these new acquaintances and I would never have known that our paths had crossed.  We might have been feet or even inches away from one another and passed by unnoticed.  Indeed, maybe our paths had actually crossed before I bought the hat.

Think of all the people we never met who may have traveled parallel roads, lived parallel lives, driven cars the same way to work and pushed shopping baskets down the same supermarket aisles.  Think of the most important people in our lives, whom we might never have known had we missed a subway train here or made a traffic light there.  And think of all the places we might have ended up, for better and for worse, if one tiny detail of our lives had changed along our way.

What if we could see how far the ripples go when we give a smile to a passing stranger, hold a door for someone struggling with too much luggage, let a car pull out in front of us, or chase down a pedestrian who dropped his wallet?  What if we knew how urging the driver to wait for someone running to catch his bus would set that person on course for an entirely different future.  A little change in one person’s day could be like the beating of a butterfly’s wings to unleash a hurricane of kindness and compassion and goodwill.

In truth, we’re better off just imagining.  Just think what life would be like if we actually foresaw the far-reaching repercussions of all our actions.  With every alternative possibility revealed, we would be, like Prince Hamlet, frozen into immobility, stupefied by the vision of unintended fallout from our most innocuous choices.  Much better to be left in darkness, with only the modest glow of the moment illuminating our decision points.

And that’s precisely the point:  we are never completely in the dark.

Like the currents of a river and the tides of the seas, the waters of time and fate carry us all along toward the same destiny.  And if we reach out to those who share the stream we occupy at any given moment, the intertwining of our fates will bring amity and love into the world in ways we will only recognize after departing this world of darkness and entering the world of light and revelation that awaits us on the other side.

The Talmud says:  All is foreseen, yet freedom of choice is given; the world is judged for goodness, and everything depends upon the abundance of good deeds.

Whether or not we can change our fate or anyone else’s is not for us to know.  But the good we bring into the world will endure, and the ultimate Day of Judgment will be tempered by the kindness we show to others as we travel the road to our final days.

Published in this month’s issue of The Wagon Magazine.