Home » My Story » Musings » Of Doors and Windows

Of Doors and Windows

When the Lord closes a door, somewhere He opens a window.

No, I didn’t make that up.  Julie Andrews says it in The Sound of Music.  Half a century later, it may sound trite, but with the drama and trauma of this American election cycle finally behind us, it sure feels appropriate.

With uncharacteristic unity, liberals and conservatives alike long ago attained consensus that the ideological pendulum was never going to swing back again.  The polling data had us all convinced that Hillary Clinton would continue the policies of our Visionary-In-Chief, opening up America’s borders, tearing down real and figurative walls, and redistributing wealth while running up debt toward the 15-figure mark.

Some welcomed this as advancement down the highway to Utopia.  Some lamented it as racing headlong toward the abyss.  But all that’s behind us now.  The door to the past is closed.  Where the window to the future will lead, only time will tell.

Be that as it may, a few thousand years before Julie Andrews, King Solomon offered his own observations about open doors.  With respect to wisdom, he said:

Fortunate is the one who listens for me, attentively waiting by my doors day by day, keeping watch by my doorposts and entryways.  For whoever finds me finds life…

From Solomon’s perspective, when a door closes, it likely means we have to work harder to find a way in.

After all, what is a door?  It is the transition point between one place and another or, in metaphoric terms, a portal from one phase of existence to another.  As such, the only times we find doors permanently closed to us are when there are other doors that lead to better destinations.

Come to think of it, that’s probably what Julie Andrews meant.

We should see life, therefore, as a series of doors and doorways, leading us ever forward… if we have the judgment to choose and the courage to face the unknown.  This is why Solomon adjures us to wait attentively and keep watch, looking and listening for opportunities, exercising patience and deliberation, always prepared to take the next step, yet always calculating to avoid the pitfalls of impetuosity.

If it sounds easy, listen more carefully.  To paraphrase Robert Frost, something there is that doesn’t love a door.  Think about it.  How often do you find yourself stuck behind some fellow pedestrian who heads for the doorway and then inexplicably decides not to go on through?  He stops to have a conversation or to check his cellphone.  She suddenly remembers something she left behind or somewhere else she needs to be.  In a single instant, the sense of purpose and resolution that leads people toward doorways mysteriously abandons them and leaves them irresolutely staring into space trying to recall where they are and where they’re going.

As successful as campaign slogans such as CHANGE and FORWARD may have proven in the past, the human psyche is averse to both of them.  No different from the laws of physics, the laws of human nature dictate that an object at rest remains at rest and, even when in motion, the forces of gravity, friction, and resistance all conspire to stop our development and progress.

We don’t see these forces at work, but that just makes them more insidious.  As we approach a new threshold, as we contemplate pushing ourselves outside our comfort zone in pursuit of some new level of accomplishment, a little voice beside our ear whispers, Are you sure you want to take the chance?  Who knows what dangers lie ahead?  Don’t abandon the safety of the tried and tested for the perils of uncertainty.

So powerful is the magnetic pull of the status quo that it creeps into the mundane activities of everyday life, creating a subliminal antipathy for every point of transition, subconsciously conditioning us to give up before we start.

And if we do make it through, that little voice changes tack but returns even more insistent.  How wonderful you are!  How accomplished!  Look what you have achieved.  Now you can rest upon your laurels.  Be satisfied with your success and be at peace.  Having made it through one door, our weaker selves try to prevent us from even contemplating passage through another.

But doorways aren’t the only places that traffic organically shudders to a halt.  Stairwells as well seem to elicit a reflexive spasm of torpidity, especially when we are traveling in the upward direction.

Now that we’ve explained our natural inclination to turn back from every doorway, it’s easy to apply the same psychology to stairs.  Every footfall takes us a little higher, a little closer to the realm from which our souls descended into this earthly exile.  Something deep inside us calls us every upward, prodding us to return to the heavens and the source of our existence.

But every force has its equal and opposite counter-force.  And the same resistance to forward progress that makes us door-averse applies itself with even greater energy to convincing us that if the Creator had meant for us to fly, He would have created us with wings. 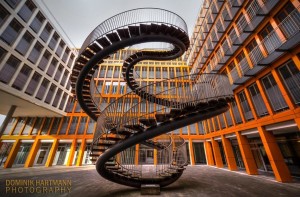 A stairway provides a particularly apt allegory for personal growth.  As gravity pulls us down, we have to push hard to propel ourselves upward against the very force that seeks to keep us earthbound.  But as we do, we gain inertia, and in a single moment we make the transition to the next level, the next step, the next plain of human existence.  But in that very same instant, just as we achieve the top of one step, we simultaneously find ourselves at the bottom of another, as if the universe were conspiring against us to keep us always in the same place no matter how much we exert ourselves to progress.

But that is precisely the point.  Like the treadmill or the elliptical at the gym, we can go fast or slow, long or short, with or without added resistance, but we will always finish exactly where we started.  Except for one thing.

We ourselves are different.  We ourselves have changed.  And when we step off the treadmill, like when we pass through the doorway or ascend the stairs, as much as it may be true that little has changed around us, something profound has changed within us.

Extend that process over a lifetime, and we will not recognize ourselves when we reach our final destination.

Published in this month’s issue of The Wagon Magazine.