What are Ethics? Part 3: Where credit isn’t due

Peace in our Mind 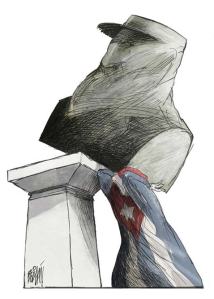 Two decades ago, Thomas Friedman suggested that someone should write a book called The Dictator Diet. Surely there must be some secret to the longevity of strongmen like Muammar Gaddafi, Yasser Arafat, and Fidel Castro. Like horror-movie mutations of the Eveready bunny, they just kept going and going and going.

Well, the last of them is gone at last. Adios, Mr. Castro. We wish we never knew ye.

It’s not such a wild notion.

Is Anyone Still Wild About Harry? 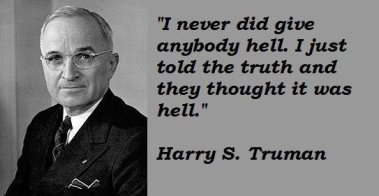 As a boy in junior high school, I bought the soundtrack of “Give ’em Hell, Harry” at a school book and record sale.  I have no idea what prompted me to spend a dollar on that particular piece of vinyl — I wasn’t living in Missouri then, but in Los Angeles, California.

Whatever the reason, it proved one of the best investments of my life.  By the time I reached high school, I had practically committed James Whitmore’s entire 90-minute monologue to memory, and Harry Truman had become my hero.

I found the video on YouTube recently and, just last week, returned to the beloved performance.  With my recent essay on honesty and integrity so freshly pressed, the following words jumped out and seized hold of me:

“Dictatorship?  No, it’ll never happen.  The Constitution will stop ‘em every time.

“But if the people every found a fellow like that they ought to show him the same amount of compassion that he showed the constitution.  No more, no less.”

What would Harry Truman say about a president like Barack Obama who, according to the Washington Post, claims three of the twelve most egregious lies of 2014 and three of the ten biggest lies of 2013?  What would Harry say about a candidate like Hillary Clinton, the “congenital liar” who seems emboldened to tell ever-inflating whoppers without a shred of shame or contrition?

And what would Mr. Truman have to say about an American electorate willing to overlook the brazen dishonesty of politicians willing to say and do anything to get into office and push through their self-serving agendas?

As the song says:  Harry, where are you, now that we need you?