Earlier this month, voters in a CBS news poll ranked presidential candidates on, among other qualities, honesty.  Joe Biden, who was then still in the race, claimed the top spot with an 85% favorable rating.  Hillary Clinton scored 68% among Democrat primary voters but only 35% among voters in general.

For whatever reasons, a huge portion of the country has made up its mind to adore Mrs. Clinton.  In their eyes, she can do no wrong.  Either her lies don’t matter, or else they aren’t lies, since if they were she would never have spoken them.

Whatever the explanation or excuse, the effect upon our society is chilling.  For when we lose our respect for the truth, there is no way our culture can survive.

It’s worth reflecting on Harry Truman’s observation that there is nothing more dangerous than a liar in public office.  Mr. Truman feared what would happen if the people believed him.  But what’s even more frightening is what happens when we follow our leaders’ examples and accept dishonesty as a way of life ourselves.

As I discuss in this article from 2011, originally published in Jewish World Review.

70 million Britons can’t be wrong. Can they?

Well, since our cousins across the pond boil their meat and drink warm lager, maybe the British love affair with one-pound coins was not the best indicator that Americans would willingly part with their one-dollar bills. Given the spectacular failures of the Susan B. Anthony dollar and the Sacagawea gold coin, hindsight seems better than 20/20.

If experience were not enough, a 2008 Harris poll found that three-fourths of people questioned prefer their dollars in bill, leaving little room for doubt. According to NPR, however, dollar-coin proponents remain undeterred. When asked about the poll, Leslie Paige, who represents watchdog group Citizens Against Government Waste, replied, “I suspect that they just don’t understand what the up sides are.” Ms. Paige believes the government should the dollar bill from circulation, thereby forcing Americans to use the coins.

In the meantime, over a billion newly minted coins line the shelves of government reserve vaults sealed in plastic bags. At a production cost of 30 cents per coin, that’s $300 million dollars of tax money spent on very pretty gold-colored trinkets that no one may ever use, with more being added to the pile every day.

Some, however, have found a way of turning fool’s gold into the genuine article. 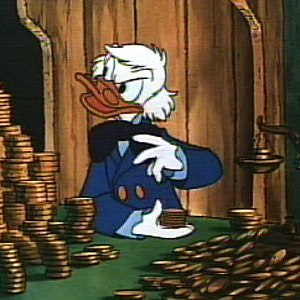 In an effort to popularize the coins, the United States Mint has offered to mail coin orders to buyers free of shipping charges. Enterprising “travel hackers” quickly figured out that they could buy the coins, rack up frequent-flier points on their credit cards, then deposit the coins to their bank accounts to pay off their credit card> bills. Officials began catching on when they noticed repeat orders adding up to as much as $600,000 worth of coins; they got another clue when banks reported receiving deposits of coins still in their Mint wrappers.

“We’ve used them to go on trips around the world,” Jane Liaw told NPR, saying that she and her husband are planning trips to Greece and Turkey, “all on miles and points.”

“It’s not illegal,” says Mint spokesman Tom Jurkowsky, “But it’s an abuse of the system… The system was set up to promote the use of dollar coins and we are simply trying to do the right thing here.”

Sadly, this seems to be the mantra of modern morality. If the government hasn’t legislated against it, there’s no reason not to do it. Everything that is not forbidden is permitted.

How recently have we witnessed the fallout from this mentality: the false promises of 125% home mortgages to insolvent borrowers, the loan-bundling that turned a fraction of a percent advantage into multimillion dollar profits, the obscene bonuses paid to executives with government bail-out money. None of these practices was illegal, even though they caused and perpetuated an economic tailspin from which the middle and lower classes have yet to recover.

The attraction of easy money is irresistible, it seems, no matter what the risk.

Ironically, the decline of the America work ethic coincides with many Americans working harder than ever. But appearances can be deceiving. While people do indeed put in longer hours, increasingly those hours are frittered away texting, tweeting, checking email, and playing solitaire. Indeed, even when working hard, many of us seem motivated less by a desire to do our jobs well than by the passionate longing to escape work altogether, either through exotic forms of recreation or early retirement.

I can’t help but remember the way my English professor described Shakespeare’s Prince Hal, who fearlessly charged into battle and “fought like hell for the privilege of not having to work for a living.”

I also can’t help but apply the teaching of the sages in the Talmud when they remarked, “Love work, despise lordliness, and do not become overly familiar with the government.”

The Hebrew word for “work” employed here is malachah, derived from the root meaning “walking” or “traveling forward.” To involve oneself in any pursuit that is productive, creative, or designed to benefit those with whom we share our world – this is highest calling of civilized society. This kind of work is truly the labor of love. Moreover, by dropping the feminine ending, the word malachah becomes malach, commonly translated as “angel;” when we strive to create a better world we simultaneously transform ourselves into divine emissaries of the Almighty.

In contrast, the sages warn us to despise “lordliness,” the lust for power that seeks to control others and harness their efforts for personal advantage. More and more, we witness the investment of time and energy in profit without production, in clever tricks to generate income effortlessly without contributing anything to society in return, in seeking the spoils of lordliness at the expense of those who perform real work.

Finally, the sages warn us against over-familiarity with the government, since it is the nature of rulers to care for little except their own continued hold on power. Even in our democratic government, too many of our elected officials are motivated either by their own lusts and avarice or by the conviction that they know what is best for the people no matter how much evidence testifies to the contrary.

In truth, there is no greater satisfaction than that derived from an honest day’s work; neither is there any shortage of individuals desperate to avoid labor at all costs, or to exploit the labors of others to feather their own nests. And no matter how hard it tries, government will never succeed in legislating noble values or a human conscience.

Just ask Ben Schlappig, who writes a travel hacker blog. According to NPR, Schlappig brags that he has “a few million miles” and top-tier status with several airlines.

“Just last week I came back from a trip from Australia and Singapore and Malaysia all in first class, just on miles,” he says, “partly thanks to the dollar coin program.”

By Yonason Goldson in Culture, Moral Compass, Society on October 26, 2015.
← Maybe they really can’t handle the truth If You Could Be Supergirl →