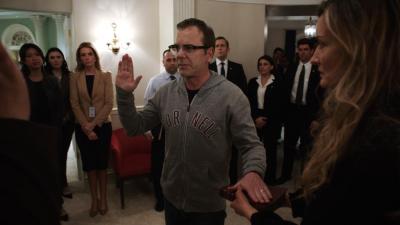 If you’re one of the disgruntled majority who feel they have no choice but to vote for one unfit presidential candidate against another who is even worse, a white knight may have appeared on the horizon.

Okay, so he’s not a real person and he’s not really going to be the next president. But in this age of surreal politics and reality television, the lines between life and art have grown so fuzzy that we might as well blur them a little more.

Kiefer Sutherland’s new incarnation as Tom Kirkman is a kind of alter ego to Jack Bauer, hero of the iconic series “24.” Where Jack can fight his way out of any situation, Tom has probably never thrown a punch in his life; where Jack instantly assesses every situation and acts with confidence, Tom seems overwhelmed and indecisive; where Jack commands respect and awe, Tom evokes skepticism and doubt.

But all of this is what makes Tom Kirkman a more compelling hero than Jack Bauer. As an American James Bond, Jack is larger-than-life and therefore inaccessible. In contrast, Tom is as ordinary as any one of us – indeed, he could be any one of us. And that is precisely his appeal.

By Yonason Goldson in Culture, Headlines, Philosophy, Psychology, Society on September 28, 2016.
← Rosh Hashanah and the Mysteries of the Universe Rosh Hashanah Tailor-Made →