Illuminating the Days of Darkness 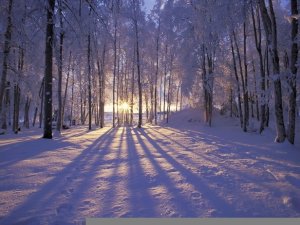 T.S. Eliot may have denounced April as the cruelest month, but most of us are far more likely to feel pangs of depression beginning to stir sometime around December.

As the days grow short and gray, and the nights turn cold and dark, that is the time we find our spirits truly starting to wither. We mourn the passing of those slow, sticky summer afternoons, long buried beneath the frost. As the threat of snow looms, we reflect sadly that winter will only grow crueler before we can begin to hope for the thaw.

It may be natural to attribute our mood to the inexorable cycle of nature and the change of seasons. But in this, as with all things, Jewish tradition offers a deeper insight into the spiritual torpor that descends upon us each year with the onset of winter.

The Talmud describes how, after eating from the forbidden fruit, Adam noticed that the days began growing shorter and the nights longer. Adam despaired. “On account of my sin,” he conjectured, “the Creator is gradually returning the world to the state of Primordial Darkness.”

With the passing of the winter solstice, however, the days began to lengthen once again, and Adam realized that the changing of the seasons was just part of the natural pattern of creation. He rejoiced, inaugurating a festival of eight days to celebrate the renewal of the world.

In this same season, 2,180 years ago, the Jewish people inaugurated the eighth-day festival of Chanukah, celebrating the victory of light over darkness.

CULTURE OF THE GREEKS

The number seven symbolizes perfection in nature, the complete, ordered system brought into existence through the seven days of creation. As such, it also symbolizes the culture of the Greeks, which then weighed heavily on the backs of the Jewish nation.

Greek culture worshipped physical perfection, artistic expression, and unblemished aestheticism. It exalted the physical form and physical prowess in their art and their architecture, in their Olympics and in their philosophy. It honored and revered all that the physical world represented.

In their aspiration for aesthetic idealism, however, the Greeks denied the transcendence of the human spirit and rejected the notion of any metaphysical reality. It should, therefore, come as no surprise that we find the gods of Greek mythology to be mere caricatures of men, with exaggerated human desires arid contemptible human shortcomings.

Neither should it surprise us that the Greeks fought so desperately to uproot the Torah, the spiritual compass that has kept the Jewish people pointed toward the light through the darkness of exile.

Judaism teaches that the potential for human greatness is achieved not through the ascendancy of the physical, but by subjugation of the physical to the spiritual. The symbol for this spiritual transcendence is the number eight, representing that which breaks through the bounds of physical limitation (symbolized by seven) and aspires for a higher reality, one that lies beyond materialism, beyond superficiality.

For this reason do we circumcise a Jewish boy on the eighth day after birth, to signify the covenant charges him with conquering his physical desires and redirecting them in the pursuit of spiritual goals.

For this reason did Adam celebrate for eight days, in recognition that the spiritual design behind the workings of nature is even more complex and wondrous than nature itself.

And for this reason do we light the Chanukah lights for eight days: to push off the dark and cold of winter and to remember that we must all see ourselves as lights amidst the spiritual darkness of the physical world, no less than the stars scattered across the heavens.

Only by igniting our own cultural enthusiasm with the flame of our tradition and our heritage will we inspire ourselves and our children to strive toward achieving the spiritual greatness that lies within every one of us.

Originally published in 2002 by Aish.com

By Yonason Goldson in Culture, Ethics, Moral Compass, Personal Development, Philosophy, Society on December 26, 2016.
← What are Ethics? Part 2: Blurring the Lines Lighting our way to the Palace of the King →