Lessons from the Hurricane Harvey

Our hearts go out to the suffering people of Houston and the Gulf Coast who are beset by the violence of nature.  Rather than just shake our heads in wonder, we should reflect upon our own fortunes and the illusion of security in a capricious world.

The following is adapted from an article originally published by Jewish World Review after the Pacific Rim Tsunami of 2004.

The Tsunami and the Circle-Maker

In a time when reports of terrorism have become all too common, it is sobering to consider the myriad ways nature can inflict death and violence on a scale surpassing the most destructive instruments devised by man. Of all these, however, water holds a unique terror in the scope and measure of its devastation.

Aside from the 300,000 lives lost across nearly a dozen countries along the Indian Ocean, millions more suffered dehydration, disease and hunger in the wake of the catastrophic tsunami. And rare though tidal waves may be, the more familiar trial-by-water of flooding leaves similar numbers homeless and in danger of starvation almost every year.

It seems ironic that water, the source and foundation of all life upon our planet, can become nature’s most malevolent instrument against the beings whose lives depend upon it.

Of course, devastation by water occupies a prominent place in human history. Virtually every ancient culture records the tradition of a great flood that inundated the world, lending credence to the biblical account of Noah and the ark. Jewish tradition describes this not as a random event, but as a divine response to the corruption of mankind.

Talmudic tradition, however, hands down a much more enigmatic account of heavenly intervention through water.

It was a time of terrible drought.  The Jewish people approached the sage Choni HaMagil and beseeched him to pray for rain on their behalf. When Choni’s supplications to the Almighty went unanswered, he drew a circle in the dust and stepped inside of it, vowing not to leave the circle until God bestowed rain upon His people.

Immediately, a fine mist settled upon the earth, too little to alleviate the drought but sufficient to free Choni from his vow.

Choni called out to heaven: “I asked not for this, but for a rain to fill all the wells and cisterns.” Immediately, raindrops larger than melons began to fall, wreaking destruction upon homes and fields.

Again Choni called out to heaven: “Neither did I ask for this, but for a rain of blessing.” Immediately a normal rain began to fall, filling the wells and cisterns of the people as Choni had requested. But the rain did not stop, and soon the entire population of the land feared that they would drown in the rising waters.

One last time Choni called out heavenward: “Master of the World, Your people can tolerate neither too much blessing nor too much misfortune.” Immediately the waters abated, and the people returned to their fields. From this time onward, people referred to Choni by the name HaMagil   —   the Circle-maker.

What is the point of this story? What did Choni mean that the people could not tolerate too much blessing?

The history of the Jewish nation begins with the Exodus from Egypt.  In commercial terms, this was the largest line of credit ever extended in the history of man.  It was a loan from on high for the greatest start-up enterprise ever, a nation built on the principles of moral and spiritual refinement.  With no credit-history of any kind, the Jews were given freedom from slavery, freedom from oppression, and freedom to chart their own course into the future.

Moreover, the coffers would remain open and accessible:  immeasurable blessing and unbounded prosperity would continue to flow from heaven on one condition — that the people would repay their loan by living according to the dictates of ethical and moral values.  By rising above material pursuits and petty self-interest, the Jewish nation would continue to receive an infusion of capital enabling them to pursue spiritual goals and ideals.

In this light, blessing may be understood as a double-edged sword. Wielded in one direction, it cuts down all obstacles that stand before us. Wielded in another, it obligates us to a standard of righteousness and refinement that we may find nearly impossible to meet.

This was the symbolism of the Almighty’s response to Choni the Circle-maker’s plea:

Two roads lie before this people, and it is their choice which to follow.  Misuse of the abundance of this world leads back to the oppression of materialism and the slavery of self-indulgence, back to spiritual emptiness and the absence of all blessing. Aspiring toward the fulfillment of a higher purpose and discarding lesser goals, however, leads to moral greatness accompanied by the many blessings of the material world.

And this too was the meaning behind Choni’s prayer:

Master of the World, whatever potential this people may have, they still suffer from human failings and human shortcomings. They cannot tolerate too little material blessing, lest the struggle to survive overwhelms them and they abandon all higher aspirations.  Nor can they tolerate too much blessing, lest they cower before the goal set for them and lose all hope of its attainment.

By all accounts, the world we live in today enjoys a level of material affluence unattained and unimagined by previous generations. Such basic necessities as rapid transit, instantaneous communication, indoor plumbing, electrical lighting and refrigeration, which we take for granted, provide us with an ease of living simply unavailable to even the wealthiest, most powerful monarchs until the last century. 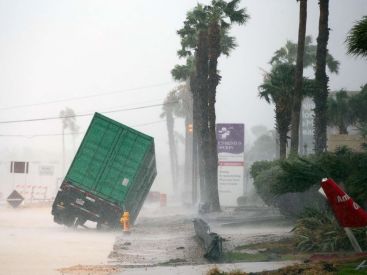 Spiritual refinement demands neither abstinence from material pleasures nor the forcible redistribution of wealth from the haves to the have-nots.  But it does require us to recognize the responsibilities of prosperity.

So how should we respond when the waters of the earth that are the source of our greatest blessing — life itself — rise up to inflict enormous tragedy, swallowing human life and draining billions of dollars of aid to spare human suffering?  We should pause to consider whether we are using our blessings wisely, and what we must do to ensure that we will continue to deserve them.