Nobody likes fundraising dinners. The speeches are dry, the menu is dull, and the seating arrangements seem to have been drawn up by the Marquis de Sade. No one looks forward to these affairs, and we attend them only out of a sense of obligation.

Since one dinner I attended last year, however, I have become more wary than ever of this kind of event.

The evening began unremarkably and proceeded unremarkably — up to a point. The food was better than usual, the speeches ran longer than usual, the company was as good as could be hoped for, and I never saw the dinner plate that slipped from the tray of the passing waiter and struck me squarely on the forehead. 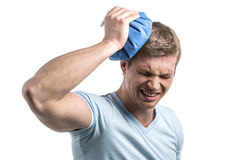 “I didn’t hit you, did I?” asked the waiter in response to the alarmed gasps and cries from the people who shared my table, several of whom assured him that he had, indeed, scored a direct hit.

“Are you all right?” he asked, inevitably. A silly question, really.

A pound-and-a-half of glazed ceramic packs quite a wallop after accelerating at thirty-two feet-per-second-squared from a height of six feet in the air.

At least I was still conscious, still sitting upright, and I didn’t think I was bleeding.

“Get a doctor,” someone said.

“He doesn’t need a doctor,” said someone else. “Get him a lawyer.”

The manager arrived with an ice pack. “Here, take this.”

“I was hoping for scotch with my ice,” I said.

He laughed, but didn’t bring me any scotch. “I’ll need your name and address, sir,” he said, handing me a pen and paper.

“Don’t sign anything,” yelled someone from the next table.

“Is there anything else I can do for you?”

“Just the scotch.” He laughed again and went away. I had figured the manager would offer me vouchers for a complimentary night’s stay. He hadn’t. (I never even got a letter of apology.) I hadn’t gotten my whisky, either.

I began regaining my bearings to a medley of more lawsuit jokes. From across the table, however, my next door neighbor offered the only profound comment of the evening: “What were you thinking about before you got hit?”

I knew exactly what he meant. According to Talmudic philosophy, there are no accidents, no coincidences, no random events. Everything comes about through the guiding hand of Divine Providence, the spiritual imperative that governs how the external world acts upon each and every one of us. In other words, if I got smacked on the head, I must have had it coming to me.

This is a far cry from the popular notion that whatever I want, I have coming to me. As much as contemporary culture may insist that privileges and entitlements are birthrights, the Talmud recognizes only our responsibilities, both to other individuals and to society. When we live up to our obligations, we may expect certain rewards to come our way. But if we do receive an apparently undeserved blow, great or small, we should assume that the equilibrium of the cosmic scales of justice somehow needed to be set back in balance, and we should reflect upon the message that has just been sent us from on high.

Sometimes we can easily identify a concrete lesson to glean from such mishaps. Other times not. But the principle holds, even when we can’t perceive any clear cause and effect: this was necessary; now we need to brush ourselves off and get on with life.

The traditional Yom Kippur liturgy provides a poignant example in its narrative concerning Rabbi Ishmael, the High Priest, who was cruelly tortured to death at the whim of the Roman governor’s daughter.

The heavenly court protested in outrage before the throne of G-d: “Is this the reward for living a life committed to holiness?” they demanded.

“Be silent!” commanded the Almighty, “or I will return the world to void and nothingness.”

A king once received a gift of fine Turkish wool, the most luxurious fabric in the world. It was so beautiful, in fact, that the king could not bear to think that even a tiny piece of it should end up as scrap on the cutting floor. He went to every tailor in his kingdom and asked each to make him a suit without letting even one thread of the wool go to waste. But every tailor claimed that such a feat was beyond his ability.

Finally, the king found a tailor who agreed to do the job. When the king returned to the tailor’s shop on the appointed date, he discovered that the tailor had indeed produced an exceptional suit of clothes. The king was elated.

“But have you fulfilled your promise?” asked the king. “Did you use every thread?”

“You really don’t know,” answered the tailor. “And the only way you will ever will find out is if you tear your beautiful suit apart and lay out all the pieces in the original shape of the fabric.”

Similarly, we often think that life is full of unfair knocks or is missing essential pieces. But to know for sure, we would have to see all of human history undone before our eyes. Only then would we have the right to assert that there were flaws in the slow sculpture of creation.

The days from Rosh HaShonnah to Yom Kippur — the traditional season of judgment — afford us the opportunity to strengthen our trust that the Master Tailor has done His job well, that He has stitched together the fabric of eternity according to a plan He understands far better than we do — even when bricks, or china plates, fall out of the sky upon our heads.

Should I have sued the hotel? the waiter? the school holding the event? the principal, who was speaking when I got hit? No doubt, I could have found any number of lawyers eager to take the case. If a woman could receive 4 million dollars for spilling a cup of coffee in her own lap, this should be worth at least as much.

But life is full of honest accidents resulting in superficial scrapes and bruises. It’s better for us (and better instruction for our children) to look for what we can learn from life’s bumps and knocks, not to look for whom we can blame and how much we can squeeze out of them. 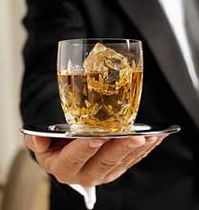 The waiter returned, contrite and apologetic, perhaps more shaken than I was. “In twelve years this has never happened to me,” he said. Evidently, he also had a date with Providence. “Is there anything else I can do for you, sir?”

“I wouldn’t mind a scotch on the rocks.”

He did. It wasn’t four million dollars, but it was better than a knock on the head.