Welcome to the Roman Empire. 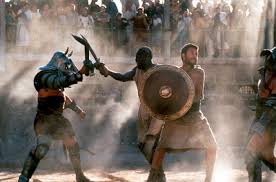 In our times, we don’t need the state to provide the bread.  Burger King, Pizza Hut, and Taco Bell supply our undiscriminating culinary needs.  The gladiatorial circuses have been reincarnated in the form of the NFL, except when the brutal melee of the gridiron is eclipsed by a billion-dollar fist-fight.

Enter Floyd Mayweather and Manny Pacquiao.  Their Romanesque and obscenely over-hyped bout, the much ballyhooed fight-of-the-century, came and went and will be soon forgotten… full of sound and fury, a tale told by an idiot.

But here’s a side of the event you won’t have read about in the papers or seen on ESPN.

My friend Art works for one of the big internet service providers.  Friday was mayhem, as all the people whose service had been suspended for non-payment called in with either back-payments or desperate pleas for mercy so they could watch the spectacle.  The tone of hysteria in call after call set Art’s teeth on edge.

The woman called in, several hundred dollars behind in her bill, far too much in arrears for any kind of leniency.  But she claimed extraordinary need.  And her story was nothing less than extraordinary.

Her brother had just died.  Her family was coming in the funeral.  She explained frantically that she had to have internet service so that her siblings and cousins would be able to watch the fight.

Art literally put his head in his hands as he told me the tale.  “I’d rather believe she was making it all up as a ruse to gain my sympathy,” he said.  “But who could make up a story like that?”

Who, indeed?  Once we have come to a place where we can conflate the loss of a loved one with the lost opportunity to watch two palookas beat each other senseless, I suspect that even the Romans would look upon us disdainfully and uncomprehending.

And, of course, we know what happened to Rome.

By Yonason Goldson in Culture, Society on May 4, 2015.
← Light up your world Limited Edition →