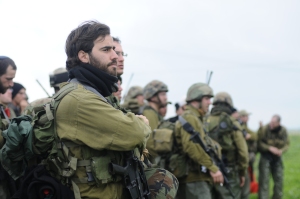 This morning’s terrorist attack by a Palestinian who rammed his car into Israeli soldiers at a bus station struck a little closer to home.  Both of the injured soldiers had just drafted into the army and were friends of my son from the same Lone Soldier group.  They were released on leave a day before my son was, or he probably would have been standing right beside them.

At least one of them will be disabled for months:  the Guardian reports this as “light to moderate” injury.

The story in the Guardian led by stating that the attack took place in the “occupied West Bank,” implying a John-Kerryesque legitimacy, then went on to report that the “incident raises the number of Palestinians killed since 1 October to 98, including an Israeli Arab.”  In the interest of balance, the story did concede that, “More than half of them have been alleged perpetrators of stabbing, shooting and car ramming attacks aimed at Israeli civilians and security forces.”

However, the story neglected to mention that after ramming his car into the crowd, the Arab attacker was shot as he tried to stab one of his victims.

Not the worst example of media bias by far, but shoddy journalism by any account.  Our children who put themselves in harm’s way to protect others from violence deserve much better.

By Yonason Goldson in Culture, Moral Compass, Politics, Society on November 27, 2015.
← The Heroism of Giving Thanks The Boundaries of the World →