Home » Culture » The Secret of the Dreidel

The Secret of the Dreidel 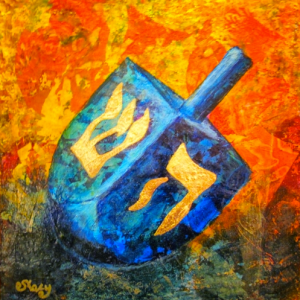 It’s more than a shame that Chanukah has become diluted to the point where potato latkes and jelly donuts excite many Jews more than the lights themselves.

It’s not hard to understand how children, with their feverish expectation of presents eclipsing the true meaning of the season, fail to think deeply into meaning of the day. And it’s not hard to understand how children might never look beyond the message of their favorite Chanukah toy, the dreidel, tattooed with the letters nun, gimmel, hei, and shin as a superficial and simplistic acronym for neis gadol hayah sham — “a great miracle happened there.”

But why, as we grow older, don’t we ask if there’s anything more?

As for the dreidel, it truly strikes a dissonant chord that the sages of a people so rich in cultural wisdom and so steeped in spiritual symbolism could have composed no better a message than “a great miracle happened there.”

If the Passover matzah symbolizes exorcism of one’s inclination toward evil, if the shofar blast on Rosh HaShanah symbolizes the eternal cry of the soul to be reunited with its Creator, if the sukkah hut symbolizes the clouds of glory the guided and protected the Jews through their 40 years of wandering in the desert, is it possible that they dreidel could offer no more profound insight into the significance of Chanukah than “a great miracle happened there”? And if there is a deeper message, what is it?

The Greek domination that opens the story of Chanukah was only one of four exiles spanning the last 2400 years of Jewish history. Before the Greeks came the Persians; before the Persians came the Babylonians. And, after a brief autonomy following Greek rule, the Jews found themselves subjugated by a power far greater than the sum of the first three: the Roman empire, under whose exile the Jews remain until today, 15 centuries after the fall of Rome. But first to Babylon.

BABYLON — ATTACK UPON THE SOUL

Frightened by the prophecy of Jeremiah that the Jews would return to their land after 70 years, the Babylonian king Nebuchadnezzar destroyed the Temple in Jerusalem and exiled the people from the Land of Israel. Nebuchadnezzar understood that if he attacked the nefesh, the soul of Jewish people, if he cut the Jews off from the source of their spirituality — the Temple and the Land — then he could sever their connection with the Almighty and nullify the prophecy of 70 years.

In fact, he was right. But he was also wrong, for the Jews retained a spiritual connection that Nebuchadnezzar failed to anticipate. Although separated from their homeland and G-d’s Sanctuary, they could not be separated from their Torah, the spiritual wellspring that keeps the nefesh of the Jews connected to their G-d no matter where they may find themselves scattered throughout the world. Jeremiah’s 70 years culminated with the famous writing on the wall, interpreted by the prophet Daniel, which foretold the death of Belshazzar, Nebuchadnezzar’s grandson, and the fall of Babylon.

PERSIA — BATTLE FOR LIFE ITSELF

The Persians, who conquered the Babylonians, attempted a much more direct approach. Harboring a bitter grudge against the Jewish sage Mordechai, Haman, viceroy to the king of Persia, conceived a plot to exterminate every Jewish man, woman, and child within the Persian empire. Where the Babylonians had tried to cut off the nefesh of the Jewish people, Haman would act far more boldly to cut down the guf, the physical body of the Jewish people.

When the Jews, by disregarding the counsel of their spiritual leader, Mordechai, forfeited the merit of divine protection against their enemies, Haman had his chance. But the moment the Jews repented the tables turned, and it was not the guf of the Jewish nation that was destroyed but Haman himself who swung from his own gallows.

GREECE — ASSAULT AGAINST THE MIND

The most subtle strategy, however, belonged to the Greeks. Also learning from the failure of their predecessors, they attempted to destroy neither the Jewish nefesh nor the Jewish guf. Instead, they embraced the Jews with open arms, welcomed the Jewish nation into their empire, and sought to seduce the Jewish people with the glittering magnetism of their culture.

The most dangerous and most insidious weapon ever to be directed against the Jews was perfected by the Greeks: assimilation, the attack upon the seichel — the Jewish intellect and the Jewish mind.

Greek culture celebrated the physical and the material, raising artistic expression and architectural design to previously unimagined sophistication and beauty. The Greeks exalted the human body, their perfectly toned and trained athletes performing Olympic feats naked before adoring and exulting crowds. Indeed, Greek philosophy perceived the human form and the human psyche as the pinnacle of creation, with no higher being and no higher authority to rival the perfection of Man.

In their arrogance, the Greeks created a pantheon of gods remarkable not for their kindness or their mercy or their grace, but for their lust, their vengeance, and their spite. The most base human impulses became not only glorified but deified through the Greek gods and the myths extolling them.

The external beauty and indulgent pleasure of Greek culture exerted a powerful attraction over all Greek subjects, and the Jews were not impervious to its assault. But whereas other pagan peoples lacked a commitment to virtue and morality, the substance of Judaism has always called for every Jew to aspire toward moral and spiritual self-perfection. By insinuating their culture into the everyday lives of the Jews, the Greeks undermined the ideological foundations of Jewish belief and Jewish practice, gradually ensnaring the minds — the seichel — of many Jews.

Thus were born the Hellenists, Jews who sought to bond the externality of the Greeks with the substance of Judaism, a marriage that could only result in the ultimate extinction of the Jew and his culture. But the Maccabees, rising up to meet the threat against the Jewish mind, drove the Greeks out of Jerusalem, rededicated the Temple, rekindled the lights, and restored the purity of Jewish practice, Jewish tradition, and Jewish culture to the land.

ROME — THE SUM OF OUR FEARS

Finally came Rome, a culture that produced no innovations but borrowed from the peoples it conquered as it spread its military and political influence across most of the civilized world. As pagan as Babylon and Persia, as materially self-indulgent as Greece, Rome mimicked not only the nations it subdued but also the tactics employed by its predecessors against the most culturally stubborn of all its subjects, the Jews.

Until today, long after the decline of Rome, assimilation remains the greatest threat to Jewish survival.

THE SECRET OF THE DREIDEL

The word Chanukah derives from the Hebrew word chinuch — Jewish education. The greatest defense against spiritual, physical, and cultural attack is the knowledge of one’s own beliefs and the commitment to one’s own traditions that endure only when they are founded on a solid education of cultural thought and practice. The flames of Chanukah symbolize the light of self-knowledge and the wisdom that comes from knowing what it means for Jews to live as Jews.

Yes, a great miracle did happen there. But to see nothing more than that shallow message is to miss the profound depth of the miracle itself, to see the dreidel, the lights, and the miracle of Chanukah as a Greek would see them.

To see them as a Jew, with all their complexity and substance and beauty, is to truly appreciate and truly commemorate Chanukah in all its glory.²

¹The gematria (numerical equivalents) of the letters of the dreidel — nun (50), gimmel (3), shin (300), and hei (5) — add up to 358, equaling the gematria of nachash (serpent), the influence of which has dominated the world since the Serpent in the Garden of Eden convinced man to sin, as well as the gematria of Moshiach (Messiah), whose influence will ultimately conquer and replace the influence of the Snake in the End of Days.

By Yonason Goldson in Culture, Society on December 8, 2015.
← The Candles and the Tree That Thou art Mindful of Him →