“A Special Place in Hell” 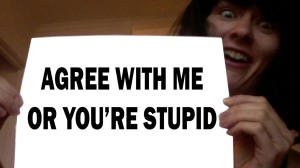 I am quoting.  Don’t shoot the messenger.

In fact, it was Madeleine Albright, the first woman to serve as U. S. Secretary of State, who declared, “There’s a special place in hell for women who don’t help each other!”

Apparently, Ms. Albright believes that Hillary Clinton is either unworthy or incapable of winning the office of the president on her own merit.  One has to wonder whether Ms. Albright also believes that she herself was appointed Secretary of State because of her sex rather than her abilities.

Feminist icon Gloria Steinem was close at hand to weigh in on the issue — predictably on the wrong side.  “When you’re young, you’re thinking: ‘Where are the boys? The boys are with Bernie,’ ” sneered the crusader for women’s rights and dignity.

Just imagine if a man had said that.  But so it goes in our age of unabashed double-standards.

In then, in classically Clintonesque style, the fearless former revolution tried to revise her message:  “I misspoke on the Bill Maher show recently,” Ms. Steinem posted on Facebook, “and apologize for what’s been misinterpreted as implying young women aren’t serious in their politics.”

“Misspoke”?  “Interpreted”?  So what exactly was Ms. Steinem trying to say?

It’s heartening that at least some women are seeing through the smoke and mirrors.

“Shame on Gloria Steinem and Madeleine Albright for implying that we as women should be voting for a candidate based solely on gender,” said Zoe Trimboli, a 23-year-old self-described feminist from Vermont.

Indeed, that would be like suggesting that people voted for Barack Obama only because he’s black.