One Cheer for Tim Kaine 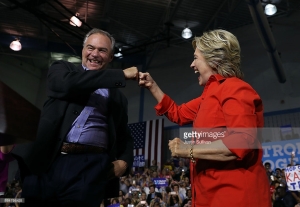 A few election cycles ago, a politician I greatly admired was tapped as running mate for a nominee I did not so greatly admire. What followed was a classic example of what is commonly known as the Waffle.

Prior to accepting the vice-presidential nomination, Mr. Waffle met with the presumptive nominee to discuss their respective positions and differences, of which there were more than a few. The future vice-presidential candidate emerged from the meeting and announced to the press that, after a 45 minute-long meeting, he had been convinced to reverse his position on all points of disagreement and now, wholeheartedly, supported the nominee’s entire platform.

At the time, I wasn’t sure what was more disheartening: that a man I admired could so easily abandon his own convictions, or that he and his team believed it would be politically advantageous to do so. In either case, it was a sad day for integrity.

That’s why I have to tip my hat to Tim Kaine.

By Yonason Goldson in Culture, Headlines, Moral Compass, Politics, Society on August 3, 2016.
← Between Heaven and Earth Look in the Mirror, Mr. President →