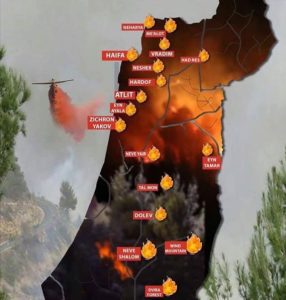 In its never-ending quest for editorial balance and integrity, the venerable New York Times gave equal time to Israeli and Palestinian news channels in its reporting of the devastating fires sweeping through Israel.

Israeli news expressed the widely-held opinion that arson is behind the unprecedented rash of urban and forest conflagrations, the latest tactic of Palestinian terrorism.

Palestinian news reported that fires in Israel are started primarily by discarded cigarette butts and children playing with matches, with the remainder caused by electrical malfunction.

An Arab spokesman observed that Israel should take measures to ensure that these causes are addressed to prevent future fires.  He failed to explain why fires anywhere near this scale have been unknown for the entire 68 year history of the State of Israel.

Thank you once again, New York Times, for honoring your famous motto:

All the news that fits, we print.

By Yonason Goldson in Communication, Culture, Headlines, Moral Compass, Politics, Society on November 29, 2016.
← When Satan Calls Peace in our Mind →