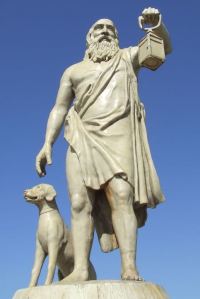 If Diogenes couldn’t find an honest man 24 centuries ago in ancient Greece, it’s hard to imagine his search would prove more fruitful in modern-day Washington, D.C. or, lamentably, in modern-day America.

It’s not hard to understand why.  In our age of personal gratification, truth has become more than merely inconvenient.  It has become an utter nuisance.

Conservatives have been eager – and correctly so – to shine the light of hypocrisy on Sally Yates, the acting Attorney General fired by Donald Trump last week for refusing to enforce his recent executive order on refugees.  Ms. Yates might have argued against the order’s constitutionality; instead, she based her decision primarily on personal bias.

Celebrated by the left for her stand on principle, what Ms. Yates really did was to violate her oath of office by failing to fulfill her duties.  It’s her job to uphold the law, not her individual values. If conscience prevented her from performing her duties, she would have resigned in protest.  But that would have required true principle.  So much easier to merely participate in another round of partisan gamesmanship.

This brings us back to Kim Davis, the Kentucky clerk who refused to grant marriage licenses to same-sex couples back in 2015.  She too claimed to stand on principle by refusing to honor her oath of office.

So why are the same voices that castigated Ms. Davis hailing Sally Yates as a hero?  And where were the critics of Ms. Yates when Kim Davis was making herself a martyr in name only?

Jedediah Bila posed that very question on The View, prompting Whoopi Goldberg to go ballistic and invoke the popular refrain, it’s not the same thing.

Nowadays, principle is just a synonym for equivocation.

Click here to read the rest in Jewish World Review.