Home » Accountability » Post-Victory let-downs are for the birds

Post-Victory let-downs are for the birds 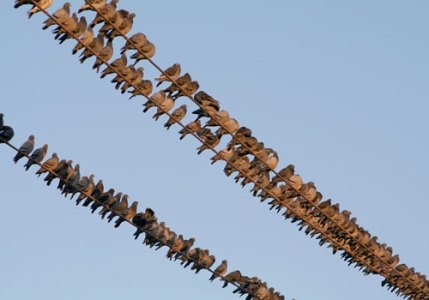 Why do people gamble?  Obviously, they do it for the rush of adrenaline they feel when they win.  No?

At least not according to Professor Jessica Stagner of the University of Florida.

Professor Stagner and her colleagues hoped to find support for evidence indicating that gamblers feel the same thrill of excitement when they almost win as they do when they actually win.  To do so, they created an experiment in which pigeons had to peck at colored markers in order to receive hidden rewards.

And what did they discover?  Although pigeons are willing to take a risk for a bigger payday, they only like it when they win.  People, on the other hand, are excited by a close loss almost as much as a big win.

In other words, pigeons are smarter than people.

The researchers speculate that a near-miss creates the illusion that we have control over situations that are largely random.  This is similar to the hypothesis that people embrace conspiracy theories because they find a world manipulated by sinister puppet-masters less frightening than one in which events unfold for no reason at all.

But there may be a more profound lesson to these studies.  Because in one sense, approaching success can truly be more satisfying than success itself.

Do you remember the last time you…

Do you remember the excitement, the elation of living in the moment, the expectation of what was to come?

And do you remember the bittersweet commingling of fulfillment and disappointment when it was over?

Because at the very moment of success, victory, conquest, or completion, we have to face the inevitable question:

Where do I go from here?

On the other hand, there’s nothing quite like the keen pleasure of watching success draw near, of feeling that victory is nearly within our grasp.  And even when things don’t go our way in the end, we can still bask in the glow of that tantalizing instant when we felt triumph waiting right around the corner.

The mistake we so often make is to focus on our goals with such single-mindedness that we forget to enjoy the process of attaining them.  The first day of an adventure is usually the most exciting, for it is filled with possibility and mystery, while every successive day brings us closer to the moment when it will all be over.

So what can we do to preserve the thrill of near-victory?

Here are a few suggestions:

Make the process the goal.  Of course we have to get work done, fill quotas, and meet deadlines.  But focusing on the quality of work, the feeling of genuine achievement, and the camaraderie of collaborative effort sweetens both the journey and the destination.

Think in rest-stops, not end-points.  Almost any task can be seen as part of a larger mission, project, or game plan.  Have in mind the next logical phase for connecting each point of completion with a new beginning.

Exchange star and supporting roles.  Often, we can accomplish more as partners. Recruit a colleague to add his or her area of expertise to your project and contribute your expertise to hers or his.  Both projects will be likely to be completed better and ahead of schedule, and you’ll end up with two victories instead of one.

King Solomon teaches, Fortunate is the one who listens for me, attentively waiting at my doors day by day, keeping watch by the doorposts of my entryways.

It is not so much what we find on the other side of each door, but the anticipation of always looking for the next opportunity and the next challenge, of looking forward to each victory not as an end unto itself but as a stepping stone to the many victories that will follow.

Each step up the stairway to success leads to the next one.  So it’s worth remembering that the moment we reach to top of one step we are immediately at the bottom of the next one.

And keep in mind that if we do reach the rooftop, we might find ourselves only in the company of pigeons.

Adapted from an article originally published in Pick the Brian.