Home » Accountability » The 7 worst things you can say

The 7 worst things you can say 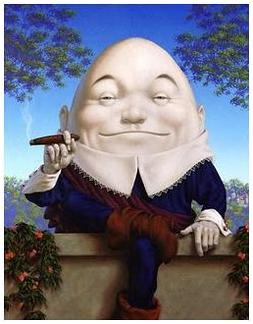 “When I use a word,” Humpty Dumpty said, in rather a scornful tone, “it means just what I choose it to mean — neither more nor less.”

This would appear to be a powerful statement of personal empowerment and forward-thinking vision.  In fact, it is precisely the opposite.

The truth is this:  if we don’t master our language, we can’t be masters of ourselves.  Because we think in words, sloppy speaking will inevitably produce sloppy thinking.  And if we aren’t thinking clearly, then we don’t know who we are, what we believe in, or what we stand for.

What are some of the worst offenders?

These are all our enemies.  The reflexive recitation of words bereft of authentic meaning constitutes much of talk radio, and it may offer a convenient refuge from having to defend our opinions with hard facts and sound reasoning.  But we don’t open up lines of communication and cooperation by hiding from clarity and logic.

Verbal interchanges have become so glib, so vapid, and so superficial, that anything short of a complete overhaul of our language will not do.  But some popular expressions are worse than others, and here is my short list of the worst offenders, phrases that should be punishable by law.

“I’m just saying.”  No you’re not.  You’re just blathering.  What is this even supposed to mean?  I know you don’t want to hear this but I’m saying it anyway?  I know you don’t care about my opinion but I have the right to express myself?  If something is not worth saying, don’t say it.  If your advice or opinion won’t be heeded, don’t bother.  But if something needs to be said, don’t deflate your message by giving the listener permission to disregard it.

“That makes no sense.”  Well, how would you know, since you obviously haven’t invested enough time thinking about it to evaluate its potential for veracity?  The universe is full of weird and wonderful phenomena that, superficially, appear to make no sense.  The computer screen you’re looking at right now is composed of molecules, which are composed of atoms, which are composed of tiny particles orbiting other tiny particles at near-light speed, but which are composed mostly of empty space.  Does that make sense?  The ideas we dismiss because they challenge our preconceptions may turn out to make plenty of sense once we make the effort to understand them.

“It’s a thing.”  I don’t know when this insipid verbal blob crept into common usage.  It has become so pervasive that I can’t even remember what we used to say.  Probably “it’s a guy thing” or “it’s a work thing.”  Now even that modicum of clarity is too much trouble.  But almost any linguistic alternative would be preferable to this meaningless arrangement of syllables.  In his prophetic novel 1984, George Orwell described how a totalitarian government controlled the minds of the populace by eliminating all insurgent vocabulary.  The goal was to reduce the language of Newspeak to a mere 200 words, rendering people incapable of formulating complex thoughts that could lead to organized rebellion.  What Orwell never imagined is that people would willingly lobotomize themselves the same way.

“I’m entitled to my opinion.”  Of course, you are.  But remember what the late New York Senator Daniel Patrick Moynihan said:  You’re entitled to your own opinion, but not to your own facts.  In this brave new world of virtual reality, opinions and feelings carry more weight than data and logic; similarly, pseudo-information is indistinguishable from real information because we don’t invest the time to determine what’s true and what is not.  After all, it’s somebody’s opinion, so it must be valid… right?

“I had no choice.”  Of course, you did.  Unless you had a gun to your head or were under hypnotic control, a choice is precisely what you made.  That you managed to convince yourself that the options were so out of proportion as to be equivalent to a choice between life and death is likely a function of your own unwillingness to face up to responsibility.  In a world that increasingly indulges the notion that free will is an illusion, that each of us is nothing more than a conglomeration of our genetics and our environment, it keeps getting easier for us to deny all guilt and claim that we are not accountable for anything we do.

“I can do what I want.”  Of course, you can.  So can lemmings.  But your ability to do what you want has no relevance to whether it’s a good idea, or to the effect it may have on others or on yourself.  Just as there are physical laws that make it impossible for us to flap our arms and fly, just as there are societal laws that prohibit us from causing physical harm to others, so too are there moral axioms that allow society to function in a way that makes all our lives better.  Valuing only what I can do reduces all human society to an irrelevant footnote and widens the gap between ourselves and others.

“Future consequences.”  In contrast to what?  Past consequences?  This is only one example of how people tack on adjectives in an effort to sound smart and only succeed in making themselves sound stupid.  Some of the more egregious offenders are:  end results, advance warning, very unique, past history, and unintended mistake.  Adjectives are the junk food of writing; they are also the hobgoblins of speech, clouding our thinking and obfuscating communication.

Now please don’t misunderstand.  These misdirected phrases are not the source of our problems; they are symptoms of a culture that has grown more careless in its conduct, more slovenly in its thinking, and more indifferent to the standards that once defined and informed the behavior of responsible citizens.  In short, we have grown lazy, no matter how hard we seem to be working.

Discipline is the key to success.  Whether in school, in our careers, in the gym, or in our relationships, if we want to succeed in our communication we can’t afford not to be disciplined in our speech as well.  Success in almost every other area is sure to follow.

And if we do make the effort, we will quickly notice that our professional relationships become more rewarding and that our personal relationships become more satisfying.  What’s more, with the ripples we send out into our communities, we can all do our part to creating a culture of greater warmth, stronger cooperation, and deeper respect among all those who share our world.

By Yonason Goldson in Accountability, Communication, Culture, Ethics, Moral Compass, Psychology, Society on June 14, 2017.
← Post-Victory let-downs are for the birds Be not scornful →