The Legacy of Woodrow Wilson 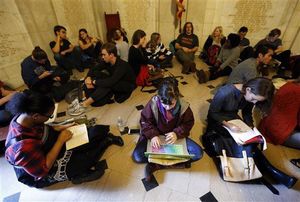 Once Iowa Democrats decided to rename the venerated event known as the Jefferson-Jackson dinner, it was only a matter of time before PC zealots would start demanding the purge of historical icons all across America.  After all, how in good conscience can a country continue to commemorate its most influential leaders if they failed to anticipate that the legal and universally-accepted institutions of their times would eventually be regarded as immoral by their great-grandchildren?

Now it’s Woodrow Wilson’s turn, as students at Princeton demand that the memory of their university’s former president be expunged from under the heavens because he supported segregation, a policy viewed by many as progressive a century ago, no matter what we may think of it now.

There is a deeper irony in their campaign, however.  In terms of political acumen, Woodrow Wilson has quite a bit in common with a much more contemporary figure, one who is revered by the very people who are protesting President Wilson’s racism and misogyny:  Barack Obama.