There’s nothing like becoming a grandfather.  Normally pulled in all directions by the endless jobs on my to-do list, I forget all about them every time I hold my three-month-old granddaughter and stare into her eyes.

Are you thinking what I’m thinking? I ask her silently.

The answer is: yes.

According to a study published last month in the Proceedings of the National Academy of Sciences, making eye contact with an infant causes the brain patterns of both you and the baby to fall into sync with one another.

A similar phenomenon has been observed among high school students working collaboratively in the classroom and among adults who reach agreement in discussion.  Of course, it’s fairly predictable that by thinking alike people cause their brain waves become synchronized.  What the new research shows is that the same thing happens independent of any exchange of ideas or information.

This kind of sympathetic connection can be wonderful when it brings people together by forming a common bond.  But it can also be enormously dangerous.

And it provides a profound insight into the historical backdrop behind the Festival of Chanukah.

The battle against Greek domination was only one of many struggles against oppression in Jewish history.  The Babylonians tried to cut off the Jews from their spiritual identity by destroying the Temple in Jerusalem and exiling the nation from its land.  Under Persian rule, the wicked Haman hatched his plot to exterminate every Jewish man, woman, and child.  The Romans combined the tactics of all the oppressors who came before them in a relentless campaign that lasted for centuries.

But it was the Syrian-Greeks who employed the most insidious stratagem:  cultural assimilation.  In the language of the sages, their objective was to darken the eyes of the Jewish people.

The culture of Greece dazzled the world with its entrancing beauty and magnetic sophistication.  But it was essentially a culture of form over substance.  The Olympic games celebrated physical prowess over inner character.  The art of sophistry revered oratorical elegance over soundness of argument.  Greek society idealized both the human form and the human mind, elevating humanity to the level of deification.

In contrast, Jewish thought asserts that Man is a perpetual work in progress, always incomplete by design, always striving toward self-improvement, always with a mission defined by an Authority greater than himself.  As such, every tenet of the Jews and their philosophy was anathema to the thinking of their Greek overlords.

But the glittery aestheticism of Greek culture was irresistible to some.  The Jewish Hellenists looked into the eyes of their masters and imagined a meeting of minds, a new syncretism whereby the most attractive aspects of Judaism and Grecianism might be blended into harmonious unification. 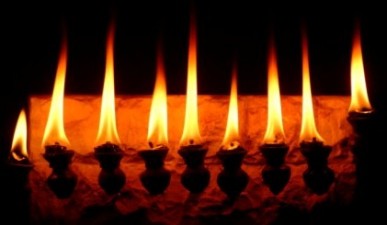 This was their undoing.  A culture that values inner truth and substance can never merge with a culture that places the highest premium on external form.  And a society that worships itself will never suffer a people who affirm loyalty to a Higher Power.

It was inevitable, therefore, that some Jews would give themselves over entirely to the ways of Greece and abandon their heritage, and that others would open their eyes and recognize that they could only survive by turning away from the seductive sparkle of Greek secularism.

Herein lies the compelling symbolism of the Chanukah candles.  There is nothing more blinding than brightly flashing lights before our eyes that overwhelm our senses and bewitch us with their intensity.  Ultimately, we descend into the most dangerous kind of darkness, the kind in which we lose all awareness that we cannot see.

The antidote is to turn away from the enticing light, to look into the darkness, to search for the source of faithful illumination that can guide us along the path of spiritual integrity.  Like the canopy of heaven whose glory only reveals itself far from the city lights, the flames of the Chanukah menorah shine bright out of the deepest darkness, when the days are shortest and the cold of winter has descended.

In a world ablaze with the deceptive light of moral anarchy and empty icons, the Chanukah candles remind us that the light of enduring truth can still be found by turning away from the glitter and by gazing into the hidden sources of timeless wisdom.